Whether you make Safety the sixth S or not, the 5S system helps you strengthen your organization's safety culture.

When Henry Ford was asked what he would do if he had to take charge of a business that failed, he replied "No business I know of ever went to the wall without first accumulating a vast pile of dirt. The dirt, and all that goes with it, untidy thinking and methods, helped to cause that failure. The first thing I would do would be to clean that business up.”

He meant not only the way a physical plant should be run, but also the way "untidy thinking" impacts efficiency and end results.

Ford systematized his thinking in a five-fold principle abbreviated CANDO:

Representatives from Toyota visiting America in 1950 adopted Ford's ideas. Translating the five items in CANDO into Japanese terms each starting with the letter S gave what we know today as the 5S.

Lately, there are references to 5S+, which add Safety or Spirit to the list. But the underlying features of the 5S system remain order, organization, and discipline.

These days, the 5 items in 5S are often given equivalent English S-words, as shown in this graphic. 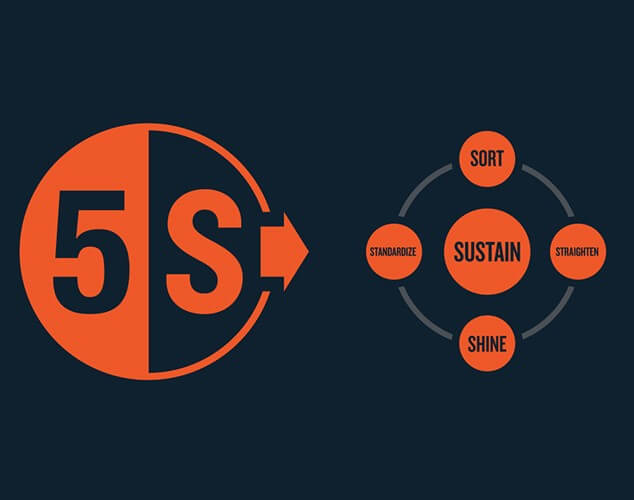 The fifth S is Shitsuke, or Discipline.

It denotes a "commitment to maintain orderliness and to practice the first 4 S as a way of life." And once it's achieved, "personnel voluntarily observe cleanliness and orderliness at all times, without having to be reminded by management."

That is safety culture in a nutshell. It is a set of shared attitudes, values, and goals that characterizes an institution.

(Find out How to Build a Sustainable Safety Culture.)

Where Does Safety Belong in 5S?

The fifth S denotes safety culture, but what about workplace safety itself?

There are two schools of thought here.

Traditionally, safety has just been understood as an integrated fact in the 5S system. If applied successfully, the 5S system would promote safety and make safety part of the everyday work culture.

Safety is seen in the overall attention to risk, risk control, and risk reduction in 5S. Achieving the goal of achieving order, cleanliness, and standardization means achieving a safer workplace.

The second school of thought adds safety as the sixth S. Adding this explicit safety component recognizes the many elements of a safety management system, such as:

There's no need to take a strong stance on this matter, since both schools of thought are committed to upholding safety, whether it stands as its own S or not.

Consider, for example, how heavily the 5S system relies on visual cues to ensure conformity in the workplace and how much it focuses on immediately correcting issues.

It's that kind of concern with labeling and standardization that gives things like the WHMIS system for labeling and storing hazardous materials, or pipe marking, labeling, color coding, and direction of flow. All of these act as visual forms of hazard control, which shows how standardization and visual reminders are an integral part of workplace safety.

Do you need to implement a 5S (or 5S+, 6S, 7S) system? Yes, absolutely. If you're a safety professional or practitioner working in industry today, you already have. It is impossible for a company to compete, make a profit, or even survive without this system in place (or one very much like it).

The advantage of following 5S directly is that you can enhance what you're already doing by making sure it lines up with an identified practice like this. This is especially so when you consider that 5S doesn't just address order but also addresses mindset, attitude, and aptitude. And when you make a positive change to those, you strengthen safety culture.

Mr. Skjerven has consulted professionally for over 27 years, with extensive Canadian experience, literally from coast to coast but with a home base in Western Canada. His experience ranges from marketing, adult education, and heavy transportation (rail) to municipal public works, fleet and transportation, oil and gas construction in the tar sands, emergency response (Fire and Ambulance), Public Works, Parks and Recreation, Security, as well as human resources and software systems, including enterprise style projects.

More from University of Kentucky

Implementing a Safety Kaizen Program: Incorporating Lean Principles is Easier Than You Think