Takeaway: Falls from scaffolds are a horrible way to get hurt (or worse), so take the precautions needed to make sure they don't happen. 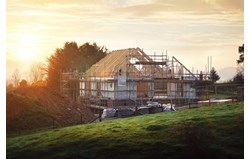 Last week, I watched a work colleague of mine being driven off to the hospital in an ambulance. He had been working on a scaffold when the planking gave way. His harness saved him from falling forty feet to the ground, but because of the way the plank fell, he was hit on the head and the shoulder by some power tools. It could've been a lot worse if anyone had been working beneath him at the time.

Working on scaffolding is always dangerous. Even though scaffolding is more convenient and safer than ladders, it is still a temporary structure that has to be assembled at each site. It is prone to wind and weather, and improperly securing or attaching it and its parts can lead to catastrophic failures.

Most scaffolding-related accidents come from falls, but some come from improperly positioned planking, or planking in poor condition. Secure planking is an important part of scaffold safety. The United States Bureau of Labor and Statistics states that 72 percent of workers who were injured in a scaffolding-related accident in the past year can point directly to planking or its supports falling away. Some planking issues include:

In addition to poor quality wood or insufficient bracing, falls can also result from insufficient training in scaffold erection, lack of safety equipment, or people working in defiance of regulations (see 6 Tips for Safer Walking-Working Surfaces for more relevant information).

Workers’ health and safety organizations like OSHA have clear rules and guidelines regarding the correct and safe use and maintenance of scaffolding. These include:

How to Prevent Problems

Scaffolding dangers can best be reduced or even eliminated through adherence to the posted standards along with regular inspection and immediate correction of weak spots, including the removal of broken or non-secure planking.

Employers should take charge of these procedures and make them part of their overall safety plan. They should make sure they are followed daily, at the start of each shift.

Workers have the right and the obligation to understand the safety guidelines around scaffolding and inspect their worksites diligently before committing to work. If a scaffold is unsafe, they have the right to stop work and inform management about the issue before continuing (find out How to Refuse Unsafe Work).

People tend to take scaffolding for granted, but a quick YouTube search will show you some startling and sometimes tragic examples of scaffold failure. It is truly a horrible way to get injured or lose your life, and like so many construction accidents, it is very preventable. Take the time to make sure the scaffold is completely safe before starting work. Hoping for the best is simply not enough.
Share this: