A Primer on the Noise Reduction Rating (NRR)

There are a number of factors to consider when purchasing hearing protection, including fit and comfort. But one of the most important considerations is the equipment’s ability to reduce the intensity of the noise the user is exposed to.

The standard measure of this ability is the Noise Reduction Rating (NRR). The EPA Regulation 40 CFR Part 211 requires this rating to be indicated on all hearing protection products, generally on the packaging. But even though it is listed on the label and used in communications from safety professionals, the NRR is not as well understood as we might expect it to be.

In this article, we'll offer some clarifications about what the NRR is, how it is calculated, and what you should know about applying it in real-life situations.

How Is NRR Calculated?

To begin, the NRR is not as precise as you might imagine it is. Rather than a strictly empirical and invariable calculation, the NRR is more like an indication of average reduction in sound intensity provided by the equipment in a controlled laboratory setting.

The rating is tested by following the ANSI S 3.19-1974 standard. The higher the resulting NRR of the hearing protection device, the better protection it will offer.

During this testing, a qualified experimenter fits ten different people with the hearing protection device being tested and measures the reduction level for each subject, using a test called real-ear attenuation at threshold (REAT). Each subject is tested three times for each of the nine different standard frequencies of the test (125, 250, 500, 1000, 2000, 3150, 4000, 6300, and 8000 Hertz).

With ten subjects, this produces 30 different results for each frequency. The mean values for those frequencies are then included in the overall attentuation mean, which becomes the NRR.

The attenuation level varies from subject to subject, mainly due to physiological differences. Because of this, experimenters will average the values. That means using a completely different set of subjects could result in the same hearing protection device receiving a different NRR.

In these ideal conditions, let's say the noise level is at 100 dB and the earplugs are rated at NRR 33. The noise registered by the user's ear will only be 67 dB, keeping them under the recommended 8-hour weighted average of 85 dB.

(Find out How to Choose the Right Hearing Protection)

Do All NRR Ratings Mean the Same Thing?

Knowing that the NRR is calculated as a mean, it is conceivable that earplugs and earmuffs with a similar NRR actually provide different levels of noise attenuation, depending on the noise frequencies the user is exposed to. For example, in a workplace where low frequency noises are prevalent, earplugs might offer better hearing protection than earmuffs with the same rating.

It's also important to distinguish NRR from another similar rating.

The highest NRR for earplugs on the market is 33. But you might see some products that have a rating of 37.

How is that possible?

Well, it's not. Not with the NRR anyway. But your eyes aren't playing tricks on you. That 37 is actually the SNR - the Single Number Rating. That is the European measure of noise attenuation. So, if you're looking at a product that is also sold in the European market, the SNR will be posted on the packaging.

For high numbers, like SNR 37, it's easy to avoid the error. But lower SNR ratings can pass for an NRR rating at a glance. Unfortunately, this simple mistake can leave workers underprotected - ear protection with an SNR rating of 33 might only have an NRR or 29 or 30.

However, it's important to understand that the NRR calculation is conducted in a controlled laboratory setting, on still subjects, with the equipment fitted by professionals. In real-life situations, hearing protection devices are used during kinetc activities that can shift them from their original setting. Not to mention the fact that complacency, expediency, or lack of training can result in a less than optimal fit - which, in turn, will provide less protection than the NRR suggests.

Improperly fitted hearing protection can make even the highest NRR earplugs attenuate the sound by a mere 10 decibles. So, the NRR itself is not a sufficient indication of the level of protection the devides will offer outside the lab and on the job site.

(Learn more in Hearing Protection PPE - Beyond the Basics)

Why (and How) You Should Derate the NRR

It is advisable to derate the NRR of your hearing protection to compensate for the limitations of the rating. Derating it will ensure that your hearing PPE provides adequate protection, even if less than optimal circumstances.

However, derating the NRR is not an entirely straightforward as you might hope.

If that wasn't confusing enough, there is another very common practice that many organizations employ. To approximate the number of decibels that the noise will be reduced by, they subtract 7 from the NRR and divide the resulting number by 2. Then, they subtract that number from the workplace noise level to get the level of exposure after hearing protection is applied.

That might be a bit confusing, so let's look at an example. Suppose again that we're dealing with noise levels of 100 dB and earplugs with an NRR of 33. To derate it according to this procedure, you would go through the following steps:

So, which derating method should you use - OSHA's, NIOSH's, or this derating formula?

Using both the OSHA or NIOSH methods, we would find that the derated earplugs reduce noise exposure to 83.5 dB. Using the other derating calculation, on the other hand, gives us a result of 87 dB.

Since every safety professional lives by the code of "better safe than sorry," it would be prudent to opt for the latter calculation. In general, go with the calculation that gives you the lowest derated NRR, since overprotecting workers is preferable to leaving them underprotected.

How do Decibels (Actually) Work?

Decibels seem like a fairly simple measure - until you realize that it does not increase in a linear fashion. Instead noise intesity grows logarithmically.

To put that in simple terms, let's compare decibels to something that has linear growth, namely, kilograms.

Now, let's consider the difference between 85 dB and 88 dB. Again, we're looking at a difference of three units. But those three units represent a much bigger growth. In fact, 88 dB is twice the intesity of 85 dB. That 3 dB increase actually represents 200% growth.

This is why you're allowed to work eight hours without hearing protection at 85 dB but only four hours at 88 dB, and two hours at 91 dB. 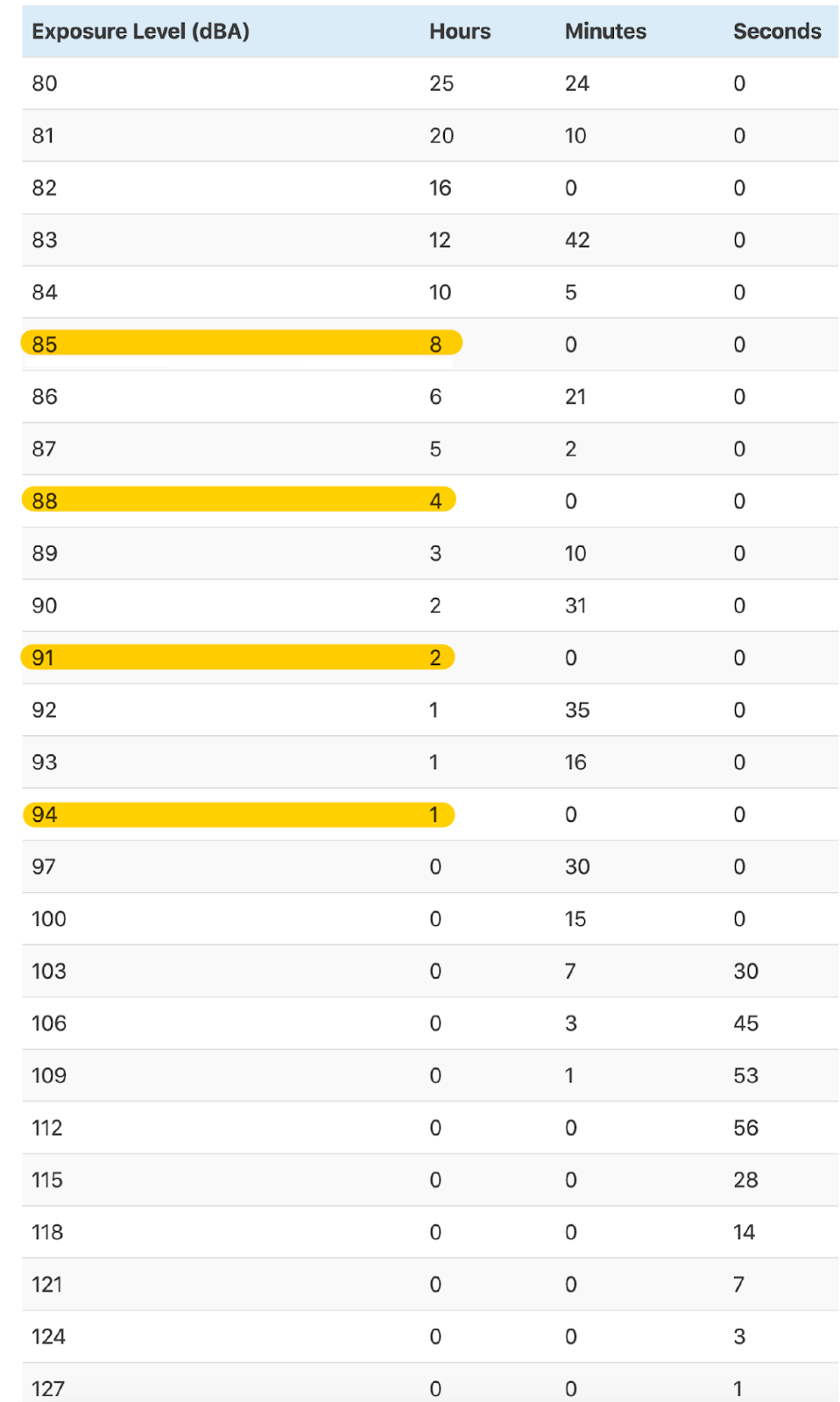 Underestimating the noise intensity by only 3 dB means doubling the noise to which the user is exposed. An even larger error could devastate the eardrums, causing permanent hearing damage.

That's why it's important to understand the NRR - how it works, how to caluclate it, and why you should derate it.

The NRR isn't a straightforward measure and is not perfect by any means. When evaluating noise protection options, it's best to err on the safe side. Don't rely on the number on the packaging. Derate it and add extra protection if you need to.

Karoly has worked at a senior level (both as an employee and a contractor) for organizations in the construction and manufacturing industries. He has a passion for developing and improving health and safety programs.

Above the Neck Protection

What Senior Management Needs to Know About Hearing Protection

How to Deal with Occupational Noise: Hearing Conservation Basics