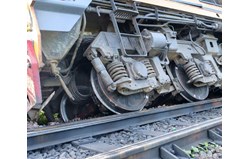 A freight train derailed in the winter of 2004 in the Canadian town of Whitby, Ontario. It was traveling westbound through a suburb that included overpass bridges to clear the north-south roads. A couple of the train’s cars toppled off an overpass onto the road below, killing two occupants of a southbound automobile. In a subsequent investigation, Canada's Transportation Safety Board found that microscopic fractures in the wheels of one of the cars led it to disintegrate for miles along the track. It had been supplied by the wrong manufacturer and didn't meet standards. Because of understaffing at the track's control center, no one detected the problem in time.

With such massive and powerful vehicles, it's no surprise that inadequate resources and insufficient time can lead to fatal accidents on our roads, rails, and in the air. Our highways are often the scene of fatalities caused by flying truck wheels. Transportation companies have been known to push the limit of load weights or driver hours. And truck inspection stations are overloaded and don't have sufficient means or authority to enforce safety laws.

The risks to workers and to individual citizens are huge, constant, and yet invisible. In many cases, a forensic review of a major transportation accident leads to a re-tooling of a law, and possibly produces damages in litigation, but many other companies rush in to fill the void left by the few that have been caught.

Transportation safety starts with the individual. There are many Federal and State laws and statutes that exist to enforce safety standards. But the sheer number of vehicles on roads and rails make it easy for offenders to slip through, either on purpose or by accident and bureaucracy.

Workers have a right to stop work if they perceive a dangerous to themselves or bystanders, and employers are prohibited from retaliating or punishing an employee for doing so (find out How to Refuse Unsafe Work). In the case of transportation safety, the reasons for stoppage may be:

Vigilance is the primary preventative measure. Get to know your vehicles and operators. Never count on things “just being right,” or that everything will get through this time. So many accidents could have been prevented by spending just a few minutes doing a review or quickly replacing worn parts. These measures are often the first target of corner cutters, but they're always less expensive than the alternative, which can be a major incident, possibly fatal, with resulting litigation added to the tragedy.

If you see something that isn't right, speak up. Many companies post a “Safety First” poster at the front of their yard, but it's up to you to call them on it and ensure they follow through on that promise.

We live in a world where there is never enough time and people are always in a rush. We also tend to be overly optimistic about how things will turn out. And that is a deadly combination. Work is never just about doing the direct responsibilities of your job; it also requires constant concern with safety.

Safe Use of Internal Powered Trucks