A Stark Reminder of the Importance of Tool Tethering

By Nate Bohmbach | Published: November 28, 2017
Takeaway:
Tethering your tools while working at heights could prevent serious injury or save a life. 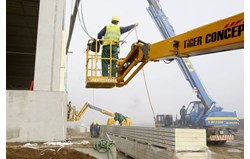 They say nothing in life is certain except for death and taxes. But Cody Tilley (and workers like him) would probably add gravity to that list, too.

Tilley was working 30 feet in the air, applying pressure to a pipe, when he suddenly slipped. He caught himself, but had to drop the 24-inch wrench he was using to do so. Fortunately, it had a tool lanyard attached. Without it, the tool would have struck his co-worker below right in the face—and might have killed him.

After the incident, he took to the web to leave a review on the tool lanyard that quite possibly saved his friend’s life.

“[It’s] an absolutely amazing tool to have if you want to protect your coworkers and/or buddies,” Tilley wrote.

And who wouldn’t want to? Especially when prevention measures like tool lanyards are so affordable and the potential cost of an accident—to person and property—is so high.

The problem is, most of the attention given to at-heights safety is focused on preventing the worker from falling, not their tools. And when falling objects are addressed at worksites, it’s usually in the form of passive controls like netting.

Additionally, the relative newness of objects at heights as a category in the industrial safety space makes it a tougher sell. Tool tethering is a “scary,” foreign concept for many. But it needn’t be. It's a simple fix that could save you a lot of trouble and prevent serious injuries.

And that simplicity is critical. No matter how serious the issue, we know the easier something is, the more likely you'll get folks to do it. Even when doing so is a matter of life and death.

Make sure to save your spot for our free webinar: