Takeaway: When working with chemicals make sure that all controls are in place, you are wearing Personal Protective Equipment (PPE) and everyone knows where the nearest wash facility is located. 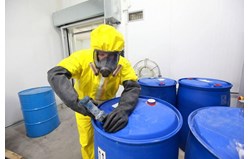 Carelessness around chemicals can be deadly. The necessary controls regarding storing, handling and mixing chemicals should be adhered to at all times. Anyone working with chemicals needs to be wearing the appropriate personal protective equipment. They should also know where the nearest wash basin and shower facility is. All staff working with chemicals should have read the appropriate data sheets and fully aware of the hazards involved.

Hazardous control measures for chemicals include training provided to employees, hygiene arrangements such as separate meal and wash facilities, storage arrangements, disposal of waste and emergency producers, such as as eye washing and emergency showering. A control strategy should be implemented for each chemical, as the level of control needed depends on the level of exposure risk.

Consider replacing a hazardous chemical with a less hazardous one. You could also use a less hazardous form of the same chemical. As an example, using a pellet instead of a power form could have a significant effect on reducing inhalable dust levels.

The best way to control the risk is to not use the hazardous chemical at all. Consider whether you really need to use the chemical. As an example, in recent times, paint manufacturers have managed to eliminate hazardous solvents such as xylene.