Takeaway: Bad things don't go away if we pretend they aren't there. 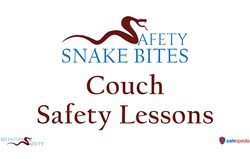 This video takes a light-hearted look at a very serious issue that plagues work sites all around the world. It’s about our tendencies to “work around” a hazard that should be corrected before work continues. As you’ll see, I knew there was a problem and chose to work around it anyway.

How often do your workers do the same?

How often do you tell them not to?

Or better still, have you ever told them to stop when something's wrong with the system?

Do they even know how to identify what those issues might be?

I could go on with this line of questioning indefinitely. That's not the point though. The point is that bad things don't go away if we pretend they aren't there. Even though my case study is pretty silly, my "work around it" mentality could have huge implications if allowed on a work site. What if my remote was a critical point of failure that could cause serious injury or death? Would your people speak up and refuse to work around that risk?

Let me put it another way. Have you given your people the expectation that unacceptable risk is... unacceptable?

How's it going everybody? It's Jason from RelentlessSafety.com and safeopedia.com, back with another Safety Snake Bite. Is it a snake safety video? No, it's about my couch. Well, a few months back I lost this little beauty somewhere in the living room. Anybody seen the remote? Just like every angry dad who loses a remote, I went to find it. I looked in all the usual places. Nothing came up. Then I looked behind the couch and gave it the usual couch colonic. That was alarming. As it turned out, my episode of Yummy Mummies was interrupted forever because it's awful and I'll never watch it again. But mostly because I couldn't find the remote until I leaned back.

This guy was inside it! Like the couch ate it. As it turned out, every time I sat back in the couch, it rewound the TV for me. Yup. Ghost rewind. So I did what everybody does in that situation and I decided to let the batteries run out of the remote that I could not find. That didn't work.

My remote being lost in the couch wasn't some big safety hazard. It was one of those nagging things that needed to go away. Point is, our workers work around the hazard, so many times. If my remote had been a hazard, that could be a big problem. Look, the ultimate point is that bad things don't go away just because we pretend they're not there anymore and sometimes they don't even run out of batteries.

Just think about the implications. If this was a heavy industrial machine and it had that one little nagging thing that needed to go away, what would happen if we work around it every single day? But we need to empower them to stop and get them fixed before they move on. The more often we work around something, the more likely it is to cause a problem. Something to think about.

If you'd like to see the original RelentlessSafety post that talks about my couch in graphic detail, including its colonic, check out the post down below. As always, if you enjoyed the video, please like and subscribe. Til next time, don't lose your remote.