Takeaway: If companies would invest more time in figuring out what it is that people live for, appeal to those things, and then show them why working safely will allow them to continue those activities, we might actually see worker deaths decrease. My point is simple: compliance is required and safety is required but they’re distinctly separate things. 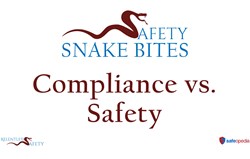 There are many who strive day in and day out to make the workplace safer. But even the best among us have fallen into what I call the “compliance trap.” We get so wrapped up in the rules we make (or the ones our companies are required by law to abide by), that we forget about the people those rules are designed to safeguard. Not too long ago, I was told that a company can’t even begin to get “good” at safety until it is great at (OSHA) compliance. I find that fundamentally backward and potentially life-threateningly harmful to employees.

There are two distinct issues at play here. The first is legal compliance. The second is actual worker safety. Let’s start with compliance.

While I would never argue against being OSHA (or any other governing agency) compliant, I will argue until I turn blue that complying with their laws does not always directly correlate with worker safety. Compliance is required, that’s without question. But compliance needs to rest on the shoulders of organizations, not individual workers. There are three things people miss when trying to sell compliance as a fatality prevention measure:

Now let's look at what real worker safety means. I mentioned already that compliance is the organization’s responsibility. It would be easy to read into that statement and assume that I mean to say the worker is absolved of responsibility, but that is entirely false. Workers have the personal responsibility to perform to their safest ability while working within the compliant environment their organization owes them. The trick is getting them to buy-in. Someone like me can yell OSHA at a worker all day long like its some four-letter curse, but the truth is OSHA just doesn’t mean anything to most people. Most people only care about what matters to them. For some it’s family, for some it's fishing, but everyone has a vested interest in not dying. Meaning most of us enjoy living.

If companies would invest more time in figuring out what it is that people live for, appeal to those things, and then show them why working safely will allow them to continue those activities, we might actually see worker deaths decrease. My point is simple: compliance is required and safety is required but they’re distinctly separate things.

Hey, how's it going everybody? It's Jason from RelentlessSafety.com and safeopedia.com and I'm back with another safety snake bite today.

I want to talk about the difference between compliance and real safety. Get out your pitchforks and torches, It's going to be a good one. Come on.

Wow. You have extremely small hands. Thanks. Yeah, like I said, I'm your new boss. Yeah. Um, no. We, we, um, we worked together for two years on the same team. No, that uh, that doesn't ring a bell. Sorry. I...I just don't, don't recall. No. Listen. Um, I heard that, uh, that you're somewhat of a writer and uh, I saw something pretty disturbing out on site the other day and I thought maybe you could write us a policy for it. Shoot. What do you got? Well, you see this guy was climbing a ladder. Was it a foot? Was it a tall ladder? Oh, it was. Oh, it was, it was a big letter. What is it? It was at least as tall as you are. I'm like five feet tall. That's not very, I mean, no, there wasn't anything wrong with it. It was just really scary.

So I'd like you to write us a policy that, uh, will keep us from getting a citation. If someone falls off a ladder and hurts themselves. An OSHA citation. You don't take this the wrong way, but I think it would make more sense if we train people how to use the ladder so that they don't fall and get hurt. I that seems like a better choice to me. No, no, that doesn't sound right. Oh, one more thing. I, uh, I wanted to tell you that, uh, that thing about your partner, uh, getting fired under really interesting circumstances, um, for that rest assured that has nothing to do with you. Um, and you've got nothing to fear.

Look, here's the thing. I would never argue that compliance isn't required. Of course we have to follow the law. But we also have to make sure that those measures are truly protecting our people and not just being done in the interest of protecting the company. If you do that then people definitely know the difference. If you'd like to read the original relentless safety post about this story, check out the links down below. And as always, if you enjoyed the video, please like and subscribe. We'll see you again soon.