Safety Moment Video - Treat a Near Miss Like an Incident

By Bryan McWhorter | Published: December 3, 2019
Takeaway:
We need to treat near misses just like we would any other accident or incident. Even if it was a brow swiper and no one got hurt, it showed that the potential for injury, property damage, or whatever, is there. 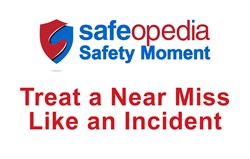 That was a near miss and that was a close call, a brow swiper. I almost got hit. What we safety professionals call a near miss. And we need to treat near misses just like we would any other accident or incident. Even though it was a brow swiper, no one got hurt. It showed that the potential for injury, property damage or whatever is there. So once we identify a hazard, once we identify a problem, then we need to put a control measure in place.

Of course, so as all other accidents or incidents, if you don't put a control measure in place after something has happened, then it's likely that it's going to happen or can happen at least again in the future. In a way leading indicator, lagging indicator, not important. The important thing is that we learned from what happened.

We do the investigation just like we would an accident or any other incident and we find the silver lining in putting a control measure in place so it doesn't happen again. Again, treat your near misses just like you would any accident or incident, which means record it, do your investigation. And I was actually even used my same incident forms, so if someone had a near miss or an actual accident or property damage, I was going to treat it the exact same way. So we could actually pull up our near misses because they were all recorded along with all our other incidents and show the control measures that we put in place to keep it from happening again. Until next time, Bryan McWhorter with Safeopedia and your safety moment. Stay safe.