By Bryan McWhorter | Published: December 6, 2019
Takeaway:
Our values and beliefs are so important in guiding our behaviors. Following the rules and having something as a value are two totally different things. 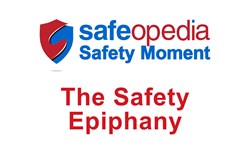 Hi Bryan McWhorter here from Safeopedia with another safety moment. When I'm teaching safety. I'll often mention the importance of having the epiphany of how important safety is. Our values and beliefs are so important in guiding our behaviors. Following the rules and having something as a value are two totally different things.

Often in training classes on safety, I'll ask people, raise your hand if you always follow the rules. Of course, no hands go up. We all break rules and we're kind of raised to do that with the idea of that rules are meant to be bent and broken. And you know, it's, it's just a rule. The end justifies the means. But once you have an epiphany, something goes from a rule to a value. Something that's truly important to us, then we tend to adhere to it.

I'll give you an example of one morning when my kids were young and I was driving them to school. Now again, this was many years ago and remember when, I'm old enough to where when I started driving, the seatbelt rule wasn't, in fact, it wasn't in effect. So I got into the habit of not fastening my seatbelt all the time. I have young children in the car, made sure they're all buckled up and safe. I jump in and start to pull out in one of my kids asked me, dad, how come you're not wearing your seatbelt? And I mean, I was instantly convicted. You know, I cared so much about their safety and it was nice to see that they cared about me.

And I had friends that I knew that had had people hurt in car accidents or they themselves had to where it had already, they'd had that epiphany where it wasn't a rule to them. It was something very important. I can remember one friend I got into his car and he wasn't going to back out or put the car even in gear until I put my seatbelt on. It was a value to him.

Until next time. Bryan McWhorter with Safeopedia. Stay safe.