By Nathan Braymen | Published: December 3, 2019
Takeaway:
The key to safety is learning. And the key to learning is communication. 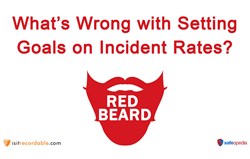 So what's the deal with setting goals on incident rates? What's the big problem?

Hey everybody it's Red Beard with isitrecordable.com, safeopedia.com, and AccuStatsUSA.com. So what is the problem with setting your goals on incident rates? I mean, it sounds harmless, right? I mean it makes sense. If you don't think too deeply about it, it makes sense on the surface. But here's the problem. When you set goals on the reporting, on a reporting number, it tends to have a chilling effect on those incidents being reported.

The key to learning is safety, I mean, the key to safety is learning. Switch that around. And the key to learning is communication. And it dampens communication when employees are fearful of not making a goal because they report an incident. In one company, for example, they have a $500 incident rate, that goes out to all employees at the end of the year. If the incident rate goal is met. Well, the problem is, you know, and $500 doesn't seem like it's that much money. But if, what if you're the employee who has the one incident that technically pushes everyone over the limit? That's $500 per employee that's being lost. And in a company that has 20,000 employees, you know, that's like what, $10 million?

So that's a $10 million report. That's all hinged on that one employee who will be blamed for busting the goal. So that is the core problem when safety people talk about the importance of setting your goals properly is that really what they're saying is, is that they don't like that system to undermine their ability to learn about hazards and their ability to prevent injuries.