By Nathan Braymen | Published: November 15, 2019
Takeaway:
Safety shouldn't be coupled with anything else. Not Environmental, Health, and Safety. Just Safety. And within that, recognize that it takes a team of many people in order to cover all your bases. 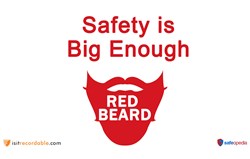 Hey everybody it's Red Beard with isitrecordable.com, safeopedia.com, and AccuStatsUSA.com. Nobody knows everything, right? That's easy to admit, but it's very difficult for safety people to admit they don't know everything when it comes to safety. It's almost like there's this expectation that safety people should be experts in all things. That's just not realistic.

In the medicine world. You know, doctors will specialize, you know, surgeon won't be a surgeon of anything of the body. You can't be a brain surgeon and a foot surgeon or a hand surgeon, orthopedic surgeon and you know, whatever spinal surgeon. It's like you have to specialize in one thing. In fact, I've read that they are looking at potentially focusing even more in even to the point where you'll have male and female doctors, like doctors that will look at certain parts of the body on men and then on women separately. Because there's such, you know, it's, it's just a specialization and there's so much in that when you get into the minutia, there's a lot of difference, between the men and women's bodies.

So in the safety world, one of the things that I think is a big problem is that we have safety coupled with something else. It's always like, "Oh yeah, we'll just throw safety in with, you know, with health or we'll throw safety in with ergonomics or throw safety and industrial hygiene or throw it under HR or you know, like EHS environment, health, and safety." That's three of them! Okay. And even within just safety, there are huge gaps in knowledge, huge gaps. You know, OSHA record keeping is a huge gap that is totally, goes totally unrecognized. And people just make assumptions with record keeping. And I'm telling you, I've talked to a lot of safety professionals and it is a huge gap and it's okay. It's okay. It's normal. It's okay. We can admit we don't know everything. So, you know, I'd like to see recognition that safety in and of itself shouldn't be coupled with anything else. You shouldn't be EHS... Environmental and safety. Shouldn't be industrial hygiene and safety. It should just be safety. Keep it a standalone position. And within that, recognize that it takes a team of many people in order to cover all your bases.