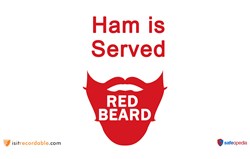 Hey everybody it's Red Beard with isitrecordable.com, safeopedia.com, and AccuStatsUSA.com. Got a fun story for you today about Marine Corps boot camp back in 2002 when I was just a nasty recruit as they call them. We had another recruit not drink enough water and he passed out. The drill instructors were punishing us because we were told to hydrate a lot and this individual decided not to do it enough and suffer the consequences.

And then of course we all had to pay for it because the chain is only as strong as its weakest link, so everyone had to pay for it. So, they took us up to our barracks and they had us drink several canteens worth of water. Of course we didn't call them canteens, we call them water bowls and then do push-ups.

And then of course, once our bellies were full of water and doing push-ups, of course people started throwing up and I will never forget what happened next. One of the drill instructors from a different platoon came over to our squad bay, looked down at the vomit of one of the recruits, leaned over and picked up a piece of ham and he said, "I didn't know they're serving ham at the chow hall" and he tossed in his mouth and ate it. And one of the big lessons of boot camp when it relates back to safety is that they changed all the rules, right?

Everything was crazy different there. It wasn't a pen. It's an ink stick. They're not pants, they're called trousers. Right. So I'm curious to see what you guys think about this method of switching things up to slow people down. Because one of the things that definitely did was slow me down. I had to think with everything I did. I couldn't even speak in the first person. You have to speak in the third person to say this recruit, not me or I. If I had to go to the bathroom, I had to say this recruit requests permission to make a head call because the bathroom's called a head not a bathroom.

So anyway, tell me what you think about that, I think there are some lessons there that we can apply in safety.