Takeaway: You earn respect by sticking to your principles 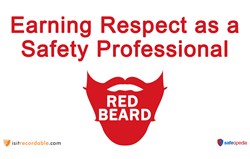 Hey everybody. It's Red Beard with, isitrecordable.com, AccuStatsUSA.com, and safeopedia.com. How do we earn respect as safety professionals? I'll tell ya, you earn respect by sticking to your principles. Okay?

I want to share a story, a life lesson I learned from when I was in the Marine Corps. When I first went to boot camp, I remember thinking, what the hell have I gotten myself into? I mean, it was an awful experience. It was a culture shock for sure. And you know, it's, it's really, really difficult. In the very beginning, I didn't sleep at all the first night I went there and then the first night you're there, you don't get any sleep at all. So I was going on two nights in a row with no sleep and, I was having hallucinations like I, I needed to go to sleep. I was so uncomfortable standing in line, you can't lean on anything. The first time I sat down was for my hearing test and I sat, I sat in the stool, put earphones on and started holding my breath because all I could hear is my breathing.

And then I heard this, I was trying to listen for the beeps and I looked on the wall and I started seeing all kinds of crazy stuff. I'll save that story for another time. But after your first week, after you've been signed to your platoon, you know, there was a chaplain that came to talk to us as a class and the chaplain said to me that one drill instructor that you hate the most, that's the one that you'll respect the most by the end of boot camp. And I remember shaking my head, no, that's not true. That's impossible. I hate that guy. He makes my life hell. Well that chaplain was right because by the end of boot camp, I remember our senior drill instructor sat us down and was explaining to us that these guys sacrificed for us. They're coughing up blood at night because they're yelling so much and it's not easy for them to do what they do.

I mean, the divorce rates for drill instructors are insane. They're under lots of stress. It's difficult for them too, and it really made me realize that these guys are doing it because they want us to survive. They want us to, they want to train us to the best of their abilities, and they're good people. They did that out of principle. Okay. Even though I I didn't like them at first. Once I realized that what they're doing is based on principles and they're in there and they're sacrificing for me, it really made me, made me think again. And, and, I have the most respect for that drill instructor now. So the same thing as a safety professional. Uh, stand up for the principles of safety. Do the right thing. And you might make people upset, but in the long run, you will earn respect.