Fentanyl - Know the Bad that Comes with the Good

By Mark Tartaglia | Published: March 1, 2018
Takeaway:
Fentanyl users are at serious risks, but so are the first responders who come in contact with them. 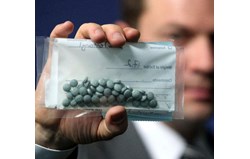 Opioids are an important class of drugs. They're responsible for relieving pain from broken bones, surgery, cancer treatment, and many other medical conditions. Unfortunately, they're also highly addictive and subject to abuse. In the last several years, one opioid in particular has received a tremendous amount of attention in the news: fentanyl.

Fentanyl and several of its derivatives are synthetic opioids that have newfound use in the illicit drug market. Fentanyl is an incredibly powerful drug – approximately 100 times more potent than morphine and 50 times more potent than heroin. Unfortunately, drug dealers, in their greed and disregard for life, lace heroin with these cheap synthetic opioids. Unsuspecting addicts are often subject to overdoses as a result.

Another unfortunate consequence of this practice is the exposure risks these extremely hazardous drugs pose to law enforcement, prison, and emergency medical personnel who may have to deal with what has become a public health epidemic.

As is the case when dealing with any hazard, the level of risk from these substances will depend on the exposure potential. And as we all know from our training, the exposure potential and risk needs to be determined by conducting a thorough risk assessment. Logically, the risk for law enforcement from raiding an active clandestine drug lab is greater than collecting evidence in a drug den, and those risks are greater than those faced by EMTs rendering aid to someone who has overdosed.

Typically encountered in powder form, fentanyl, its derivatives, or laced heroin all present both inhalation and dermal exposure risks. The greatest exposure risk, however, is inhalation, which also carries the potential for subsequent respiratory failure. Still, dermal contact poses a serious secondary exposure risk that must be protected against.

In most cases, standard Tyvek® garments are acceptable for handling hazardous particles. Fentanyl, however, is the exception. The high potency of the substance has to be taken in consideration, and those handling fentanyl and similarly potent powders are strongly advised to use a taped seam garment.

For high-risk exposure incidents, such as raids of production and milling labs where a SCBA may be required, an encapsulating suit may be needed. For lower risk situations where the chance of dermal contact is minimal, for instance when handling an overdose victim, Tyvek® 600 and Tyvek® 800J are excellent options.

In all cases, a hazard assessment should determine the PPE ensemble that is suitable for the risks.

Fentanyl is at the epicenter of a deadly crisis. Use the right PPE and don't let yourself be another one of its victims.

This Safety Moment was written and edited by Safeopedia and its staff. It is based on a technical bulletin on DuPont™ SafeSPEC™ which you can find here.