Takeaway:
Have an emergency plan covering the immediate containment of the hazard and the likely effects on the wider community. 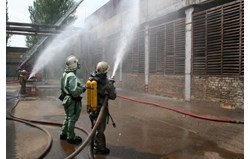 Every place of work that uses, stores or handles hazardous substances should prepare an emergency plan to cover all reasonably foreseeable events such as fire, major spillage or toxic release. The plans can be at two levels, one for the immediate production or storage area and the second for the site as a whole, taking account of likely effects on the local community.

It is vital that employees and emergency services know exactly what to do should an incident occur. The plans of the site, ideally containing a diagram of the building and area, should highlight fire extinguishers, emergency exits, spillage control equipment, and should be simple and clear. All employees should be properly instructed, fully trained and rehearsed in those emergency plans. The local emergency services should be encouraged to familiarize themselves with the site.