Takeaway:
Hydrogen sulfide is a potentially deadly gas that is released into the atmosphere. All workers in potential contaminant areas must wear a detector that will sound if the level exceeds 10 ppm. 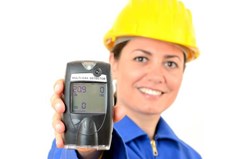 Hydrogen sulfide is a flammable, colorless gas that smells similar to rotten eggs. Odour, though, is not a reliable indicator of the hazard posed because our sense of smell can become fatigued. When released into the air, hydrogen sulfide remains in the atmosphere for about 18 hours. In the atmosphere it will slowly transform itself into sulfur dioxide and sulfuric acid. Potential exposure sources of hydrogen sulfide include sewers, landfills, petrol refineries, and paper / pulp mills.

Low level exposure to hydrogen sulfide can cause irritation to the eyes, nose and throat, along with dizziness and an upset stomach. Asthmatics may also have difficult with breathing. Higher level exposure for a brief period of time can cause a loss of consciousness, with possible death resulting. Sometimes a person who has been rendered unconscious will appear to regain consciousness with no apparent ill effects. However, they may suffer long term headaches, a poor attention span, poor memory and poor motor function.

If you are working in an area where hydrogen sulfide is present, every worker should be equipped with their own hydrogen sulfide detector that will sound an alarm if the level in the atmosphere reaches 10 ppm. The detector should be worn below the neck. A single alarm activation will require that all employees evacuate the area.