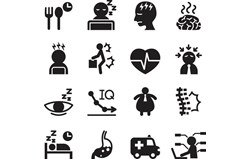 Working extended shifts are a common cause of repetitive fatigue. Reduce fatigue by limiting extended shifts, and increasing break and mealtimes when shifts are extended. Jobs that require heavy physical labor should be undertaken at the start of a shift. Do not extend shifts beyond more than a few days, especially those that involve heavy physical and mental exertion.

The signs and symptoms of workplace fatigue include tiredness, sleepiness, irritability, depression, giddiness, loss of appetite, digestive problems, and increased susceptibility to illness. Fatigue can have a dramatic effect on your workplace performance. It will result in impaired decision making ability. Your ability to make complex decisions will also be adversely affected. You will not be able to communicate as readily as you normally would. You will also have an increased likelihood to make simple errors at work. This will increase accident rates.

As an employer, you can help your workers to ward off fatigue in several important ways. Minimize dimmed lighting, try to keep working temperatures at a comfortable level, and do not give jobs to individuals that required sustained attention over a extended period of time. Provide work tasks that provide a measure of variety and interest. Worker tasks should change throughout the shift.