Arriving at the Scene of an Accident

Takeaway: Minimize the effects of the injury; contact emergency services; isolate the site. 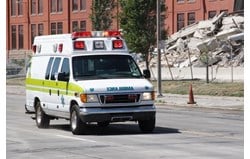 On the site of any accident the first and most immediate action should be to secure the injured and take action to minimize the possible effects of the injuries. First aiders should be given all assistance possible handling the patient.

In the case of serious injuries, a check should be made that an ambulance and medical assistance have been called. When they arrive, the emergency response team will take charge of treating the patient. The patient should not be moved, but made as comfortable as possible. If the individual is trapped in or under machinery, efforts should be made to dismantle the machinery so that he can be released.

Once the patient has been removed and taken away for treatment, the site should be isolated and nothing disturbed. An investigation should start immediately. In the case of a fatality, the police should be informed and the site, including the property of the deceased, should be left undisturbed until they arrive.

The police investigation will be concerned with the cause of death, rather than the cause of the accident. The HSE should also be informed and, if the death was due to gassing or poisoning, a doctor from EMAS will be involved.