What Does Fire Precautions Mean?

The term “fire precautions” refers to any measure that is undertaken to minimize the risk of damage from fire to life or property. It includes the implementation and installation of policies and equipment that are designed to prevent a fire, as well as those designed to suppress a fire should one occur.

When describing the structural features and available equipment used to ensure that occupants of a building are able to exit the building and gather in a safe place in the event of a fire, the term general fire precautions (GFP) is used.

In occupational health and safety contexts, the amount of fire precautions that are necessary in a given workplace depends on the level of risk that is associated with that workplace. Industries that do not handle flammable materials, such as those that revolve around office work, typically only require general precautions. In contrast, process manufacturing industries, such as the petrochemical industry, are subject to far stricter requirements when it comes to fire precautions.

Although fire prevention measure in workplaces have reduced the prevalence and damage caused by fires, at both residences and workplaces, fire-related losses continue to be a significant source of economic damage and civilian death. According to the National Fire Protection Association (NFPA), fire caused a total of 3,700 deaths and $14.8 billion in damages in the United States (page 1) In 2019.

The mandatory use of fire precautions is the key manner in which OHS authorities impose fire safety obligations on employers. The type of fire precautions that are required in a given workplace depends on the amount and nature of the risk that is present within that workplace; however, all employers must ensure that workers can safely exit workplace premises in the event of a fire.

To provide a means of escape, workers must be able to follow an unobstructed route to an exit, and that route must be clearly marked with indicators that are visible in fire conditions. Furthermore, the building must be designed with material (e.g., fire doors) that slow the spread of the fire for long enough to allow workers to escape.

In specific instances where escape from a facility is not an option, such as on oil rigs, workers must have the opportunity to shelter-in-place.

Rules related to fire safety are among the earliest occupational health and safety regulations. The Triangle Shirtwaist Fire of 1911—a New York factory fire which killed 146 people—resulted in a public outcry that resulted in new regulations, entrenching fire safety as a primary concern. Fire precaution regulations are now common to OHS authorities around the world. 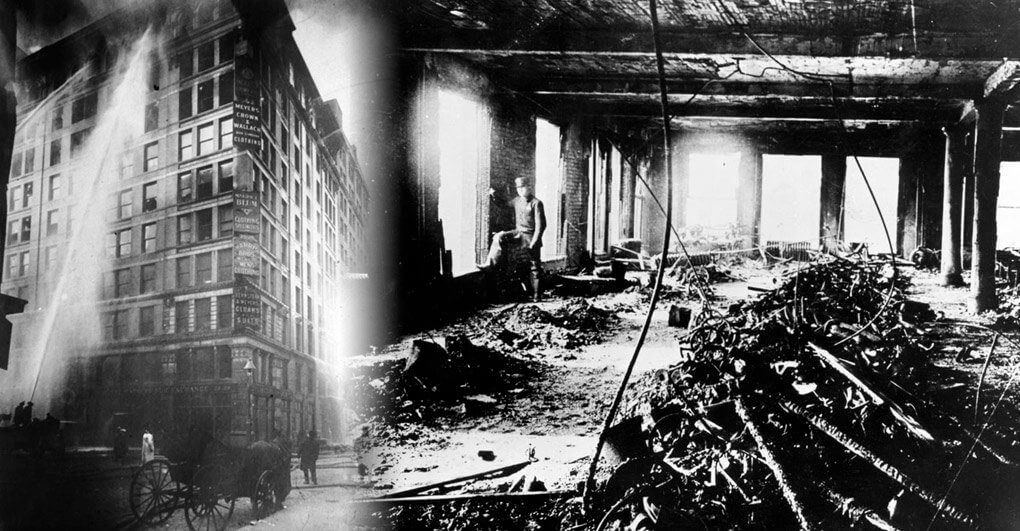 While all OHS regulators require some level of fire precaution, they often refrain from specifying exactly how those precautions must be implemented. Instead, they rely on employers to demonstrate that they have taken appropriate measures to meet the regulator’s requirements. For example, a petroleum refinery could demonstrate compliance by showing that they implemented the precautions described by the Energy Institute’s “Model Code of Safe Practice, Part 19: Fire precautions at petroleum refineries and bulk storage installations.”

Employers must also ensure compliance with the fire precautions mandated by their local building codes, such as the Building Regulations (UK), and the International Building Code (US). Additionally, the equipment and building materials used in fire safe workplaces are subject to a variety of product quality and testing standards put forward by organizations such as the American Society for Testing and Materials.

The type and severity of fire risk that exists within a given environment varies significantly depending on the hazards present in the environment. Modern fire safety codes and regulations eschew a “one-size-fits-all” approach, and are instead built on a risk-based principle that requires employers to perform a fire hazard assessment to evaluate the level of risk (likelihood and severity of fire) present in their workplace.

Although fire prevention measure in workplaces have reduced the prevalence and damage caused by fires, at both residences and workplaces, fire-related losses continue to be a significant source of economic damage and civilian death. According to the NFPA, fire caused a total of 3,700 deaths and $14.8 billion in damages in the United States (page 1) In 2019.

Everything You Need to Know About Safety Data Sheets